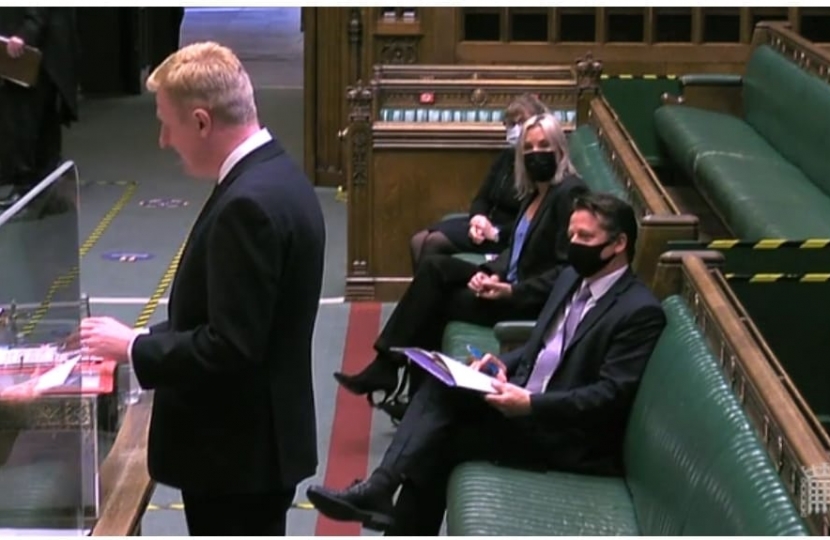 I was in the House of Commons alongside Oliver Dowden, the Secretary of State for DCMS who made a statement on the proposed football European Super League.

The whole House seemed to be united in condemning the proposals for the reasons outlined in the Secretary of State's statement.

He also formally announced the Fan Based Review of Football Governance and confirmed former Sports Minister Tracey Crouch will be the chair. I look forward to working with her, other stakeholders and football fans across the country on this review.

Here are some points from his speech:

We will not stand by and watch football be cravenly stripped of the things that make millions across the country love it.

The football authorities have robust rules in place to deal with this, and I know from my conversations with them today that they are rightly considering a wide range of sanctions and measures to stop this move in its tracks.

My message to them was clear: They have our full backing.

But be in no doubt: if they can’t act, we will.

We will put everything on the table to prevent this from happening.

We are examining every option, from governance reform, to competition law and the mechanisms that allow football to take place.

Put simply: we will be reviewing everything the government does to support these clubs to play.

I discussed our options with the Prime Minister this morning, and we are working at pace across government and with the football authorities.

But it’s clearer than ever that we need a proper examination of the long-term future of football.

That’s why over the past few months I have been meeting with fans and representative organisations to develop our proposals for a fan-led review.

Today, we are formally triggering the launch of our fan-led review of football. The review will be chaired by the Hon Member for Chatham and Aylesford, and will be a root-and-branch examination of football in this country.

It will cover the financial sustainability of the mens’ and womens’ game; governance and regulation; and the merits of an independent regulator.

Crucially, in light of this weekend’s proposal, it will also consider how fans can have an even greater say in the oversight of the game, and the models which might best achieve that.

We are the people’s Government. We are unequivocally on the side of fans - and their voices have to be heard when it comes to the future of our national game.

Photos from this week

Whilst I've been out and about in the constituency, it's been great to see the locals in action at Evesham Rowing Club, and with all the weird weather we've been having there were some spectacular clouds.