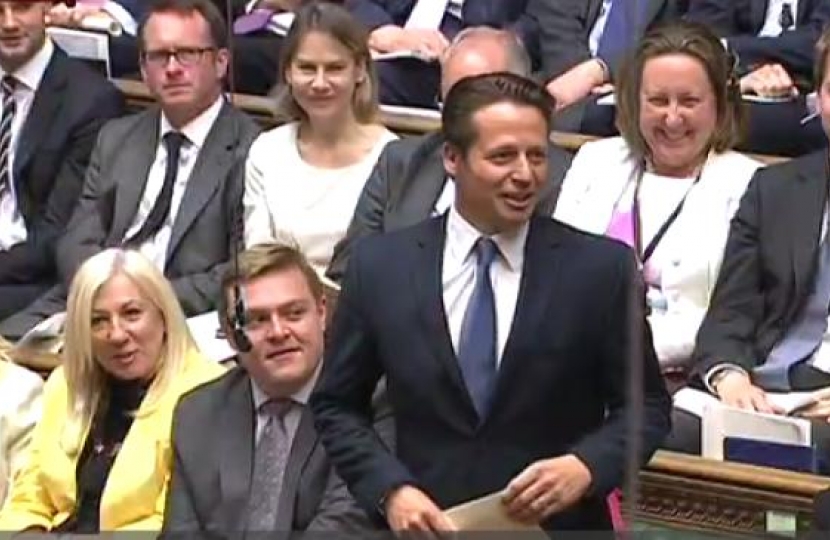 Prime Minister declared I was his 'new best friend' after I raised the need to redouble the Cotswold Line with him in the House of Commons.

I used my first opportunity of Prime Minister’s Questions on Wednesday to champion Worcestershire’s economic performance and put pressure on the government for further improvements to local train services.

I first quoted recent Office of National Statistics (ONS) figures which showed Worcestershire had the third fastest economic growth rate in England (behind only London and Oxfordshire) before highlighting the fact that since 2010 unemployment in his Mid Worcestershire Constituency had fallen by 62%.

I then went on ask the Prime Minister to agree that the local economy could also be helped by further redoubling of the Cotswold Railway line.  Iadded that such improvements would be of benefit to several other constituencies along the route – one of which is the Prime Minister’s.

In his response the Prime Minister said,

“My honourable friend has got off to a tremendous start…mentioning the railway line that goes straight through the middle of my constituency, which I want to see the further redoubling of. So, he is already my new best friend.

“ …We have already got the intercity express trains planned to operate between London and Worcester from 2017. There will be new and updated trains for every part of the Great Western Franchise. But he is right (to say) further investment in redoubling the railway between Oxford and Worcester really is necessary to deliver the extra services and the more reliable services that both his constituents and my constituents would like.”