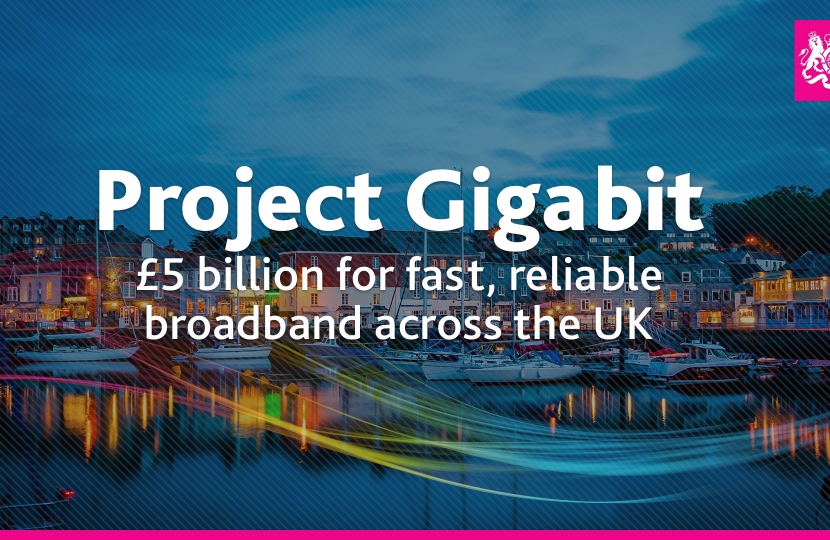 Today we launch Project Gigabit which sets out £5bn to get hard to reach areas on lightning-fast gigabit broadband.

It's great news that Worcestershire is included in the second phase, starting in June and targeting houses in rural areas left behind by broadband companies. I know that it will make a big difference especially in the more rural areas of the constituency in giving people greater freedom to live and work more flexibly.

More than one million hard to reach homes and businesses will have next generation gigabit broadband built to them in the first phase of a £5 billion government infrastructure project. Their available speeds will rocket to more than 1,000 megabits or one gigabit per second. Contracts for these first areas will go to tender in the spring with spades in the ground in the first half of 2022.

In June the government expects to announce the next procurements to connect up to 640,000 premises in Norfolk, Shropshire, Suffolk, Hampshire, the Isle of Wight and Worcestershire.

Gigabit broadband is being rolled out rapidly - from one in ten households in 2019 to almost two in five today. The UK is on track for one of the fastest rollouts in Europe and for half of all households to have access to gigabit speeds by the end of this year. The successful Gigabit Broadband Voucher Scheme is also being relaunched with up to £210 million to give people in eligible rural areas immediate financial help to get gigabit speeds. On top of this the government is making up to £110 million available to connect public sector buildings - such as GP surgeries, libraries and schools - in the hardest to reach parts of the UK with this revolutionary infrastructure.

Project Gigabit is the rocket boost that we need to get lightning-fast broadband to all areas of the country. This broadband revolution will fire up people’s businesses and homes, and the vital public services that we all rely on, so we can continue to level up and build back better from this pandemic.

I am deeply saddened to hear of the death of HRH The Prince Philip, Duke of Edinburgh.

He led an extraordinary life. Our nation owes the Duke an enormous debt for his decades of dedicated service.