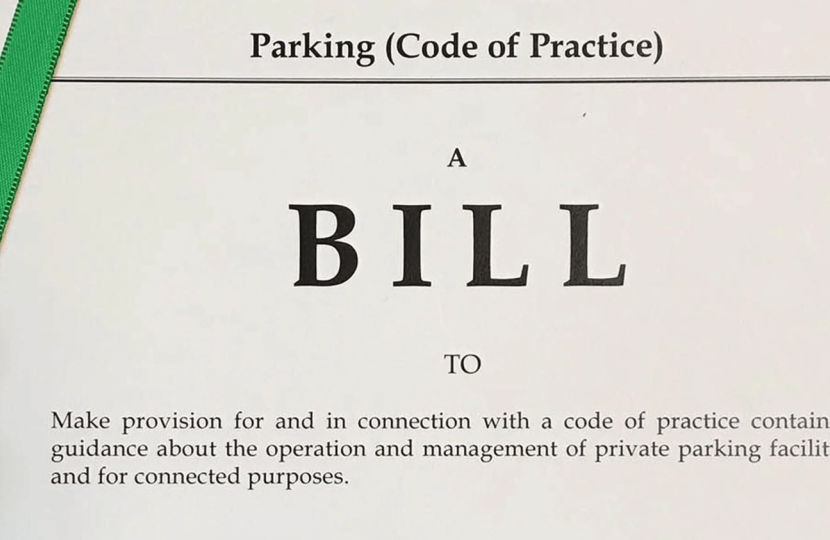 I was in the House of Commons on Friday 23rd November to speak in a debate on the Parking (Code of Practice) Bill, which was in its final stages in the Commons before being passed for consideration to the House of Lords. The Bill aims to establish a unitary code of practice for private car park operators that is enforced by a new independent body funded by a levy on operators. It comes after around 10,000 people approached the Citizen’s Advice Bureau (CAB) with complaints and queries about private car parks in 2017. This is in addition to hundreds if not thousands of people who used other routes such as their MP or the parking industry’s Accredited Trade Associations (ACAs) to appeal against fines.

In my speech, I talked about how some of his own constituents had approached him about private parking disputes and discussed how a unified code of practice would make dispute arbitration fair, reduce confusion in penalised motorists and allow for a more rigorous regulatory environment that drives up general standards in the parking industry. Private parking disputes are one of the more frustrating issues that I deal with as an MP. Currently, there are two distinct codes of practice and the arbitration of disputes is far too complicated. I try to help constituents how I can but my hands are often tied by the problems of the system.

So I wholeheartedly welcome this Bill and its measures to address these issues. I commend my colleague Greg Knight for bringing it to the House of Commons and I look forward to seeing its positive results in my constituency. Hopefully this will mean fewer confused motorists and fewer fractious disputes.