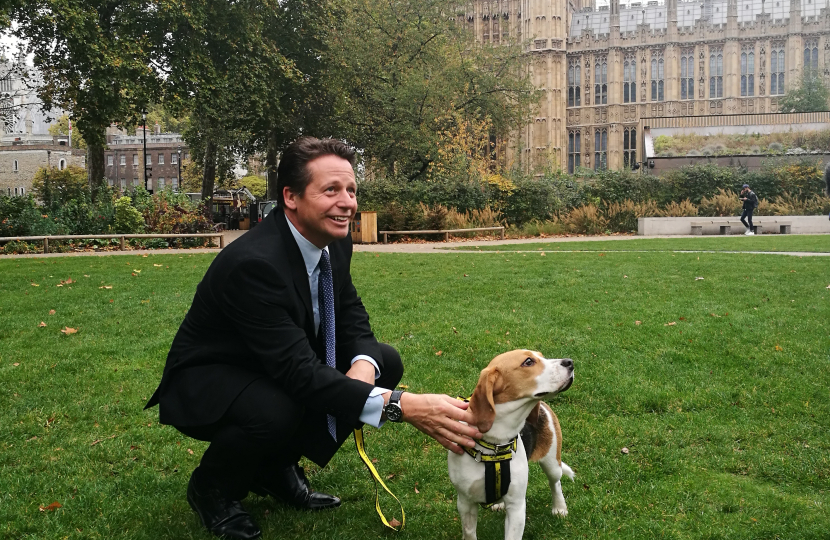 Thank you to those who have contacted me about animal welfare in the UK. I know that we are a nation of animal lovers and many of my constituents contact me regularly about upholding and protecting our high standards of animal welfare.

First and foremost, I agree that animals are sentient beings who can feel pain and suffering, and I would like to reassure you that strong action is being taken to reduce their risk of harm.

The Government is committed to making any necessary changes to UK law in a rigorous and comprehensive way to ensure animal sentience is legally recognised after the transition period and legislation will be brought forward when Parliamentary time allows. This also includes ensuring the UK has an effective means of making sure animal sentience is reflected in future policy decisions. I understand that the Department for Environment, Food and Rural Affairs is currently assessing how best to support government departments in considering the welfare needs of sentient animals when they are developing and implementing Government policy, as well as continuing to engage closely with relevant organisations and authorities to enhance its policies on this issue further.

Encouraging action is being taken to improve animal welfare at home and abroad by increasing maximum sentences for animal cruelty, banning third party sales of puppies, and introducing one of the world’s toughest bans on ivory sales. Last year I held a Westminster Hall debate on puppy smuggling. It was in this debate that the then Minister for Animal Welfare, David Rutley, spoke about the legislation to be brought forward for tougher sentencing on animal welfare laws. I believe since this time, we have seen very welcome steps to demonstrate exactly how seriously this Government takes animal welfare. The Animal Welfare (Sentencing) Bill has now been introduced in the House by Chris Loder MP, and will be backed by the Government. The new Bill will enable tougher prison sentences for the most serious perpetrators of animal cruelty, from the current maximum of six months to up to five years. Due to the coronavirus outbreak and the changes to the setup of Parliament, this Bill will now be heard on 23rd October.

Having left the EU, I am pleased that the UK will now have the opportunity to do even more. A consultation will shortly be carried out on restricting live animal journeys, requiring approval for longer journeys and bringing forward welfare conditions for these journeys when they are necessary. The Government is also looking at proposals to ban the trade in pet primates, extending compulsory microchipping to cats and controlling the trade in hunting trophies from endangered animals.

I do appreciate that this is an issue that many of my constituents feel strongly about and I am pleased with the commitments to make Brexit work not just for citizens, but for the animals we love and cherish too.

Thank you again to those who took the time to contact me about this.

I have received correspondence from a number of constituents about the status of animals as sentient beings.