The EU - My Views 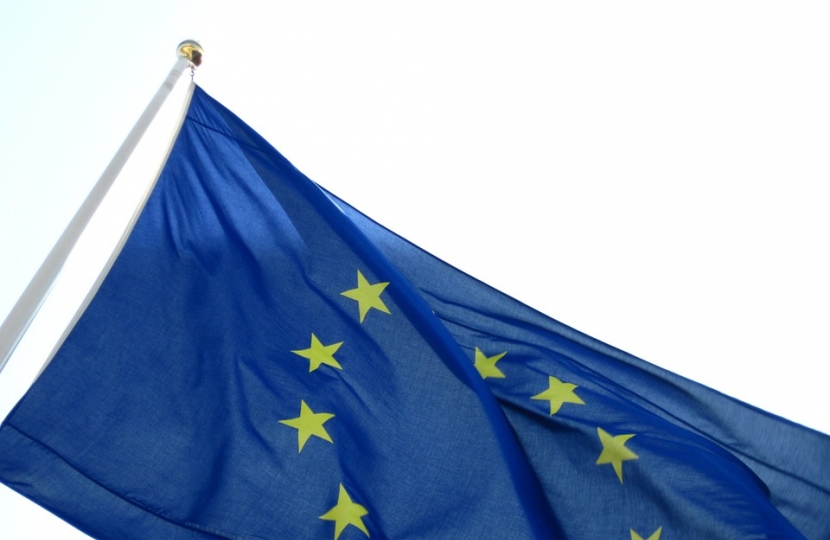 On Thursday 23rd June 2016 the British people will be given the opportunity to vote whether to remain in or leave the European Union.  The last time this question was posed to the British public was 1975 which means that no one under the age of 59 has had an opportunity to express their opinion on our status with Europe.

I am immensely proud that it is our government that has delivered the referendum – fulfilling a clear manifesto promise.  As an MP, I voted in Parliament for the referendum to take place and in doing so know that I was representing the wishes of the vast majority of my 73,000 constituents.  On 23rd June, however, I have just one vote and no more say than any other voter in the country.

After much deliberation and consideration of all the arguments, I have decided that I shall vote to stay in the EU.

I have always said that I would vote in the way that I believe would be in the best long term interests of my children and I now feel sufficiently convinced that staying in the EU is in their – and the UKs - best economic and security interests.

I will be voting to remain in the EU but I have great respect for the views and opinions of those who wish to vote to leave.

Whatever the result, It will be up to MPs and the government to make it work.  If we decide to leave the EU then I want the transitionary arrangements to be as smooth as possible and for us to negotiate the best possible terms under a new trading agreement.  If we vote to remain, then I will continue to argue for further reform in Europe, more democracy and better accountability.

I want the campaign to be civil and well informed.  Both sides of the campaign need to make sure they do not exaggerate, spread fear or propagate factual inaccuracies on important economic, security and legal issues.  It will do us no good if the country makes a decision based on poor information.

The biggest issue for me was around the overall tone and direction of our relationship with Europe – particularly on the principle of ‘ever closer union’.  I would not vote to remain if the Prime Minister had not secured an exemption on ‘ever closer union’ as while I welcome the economic and trading advantages of being in Europe I have never supported some sort of ‘United States of Europe’.  I view Europe as a trading opportunity not a political or social experiment.

The recognition of the UK’s special status within Europe; having access to markets but not being committed to further political integration; not having the Euro; and not being part of Schengen is immensely important and sets us down a path that I am comfortable with and that is very different from many of our European neighbours who wish to take a more integrated path.

I also welcome commitments on reducing red tape and tackling immigration.  I believe that the hard-won reforms on welfare will inhibit the abuse of freedom of movement and prevent the UK being a magnet to people who do not want to fully contribute.  Few people object to people wanting to come to the UK, pay taxes and work; but the British people will not tolerate those who abuse the system and who do not pay their way.

Two groups have particularly influenced my opinion to stay in the EU:  business and young people.

I have visited many local businesses, large and small, and the overwhelming majority believe that staying in the EU provides the best opportunities for jobs growth and prosperity.   Many businesses export to European markets and many more have an international workforce.  While much international trade would clearly still continue if we left the EU, accessing European markets would undoubtedly be more difficult and local jobs may well be at risk if we exited.

That the eurosceptic Business Secretary, Sajid Javid, has announced he will be campaigning to remain in Europe speaks volumes about the business case for staying in a reformed EU.

I have spent a lot of time visiting schools since becoming an MP and many young people express great enthusiasm for cooperating with our European neighbours and great interest in potentially living and working abroad at some point in their life.  Many fear that opportunities to live or study overseas may be restricted if we withdraw from the EU.

While nearly 3 million Europeans live or work in the UK, more than 2 million Brits live, work or are retired in Europe.  I have not heard a convincing argument from the leave camp about how transitionary arrangements would work in the event that we left the EU and the automatic entitlement to live overseas would end.  This uncertainty would be damaging to business as well as our public services, universities and research facilities which rely on international labour and co-operation.   It would also cause huge uncertainty and stress to the hundreds of thousands of people spending their retirement or planning on spending their retirement in Europe.

The EU is far from perfect and I am well aware that the deal the Prime Minister secured has not satisfied everybody.  But getting all 28 nations to agree to a deal is quite an achievement – particularly with some hard won reforms to welfare and a promise of even more open and competitive markets.  I would personally have liked to have seen greater clarity on sovereignty but believe further work on that can be done in parliament.

Whilst I was open to the idea of leaving, I have failed to be convinced that if we left the EU we would be able to secure an advantageous deal that would give us the benefits of access to European markets, but without significant cost and conditions.  I have realised that if we left the EU it is unrealistic to expect our European partners to cut us a special deal without significant obligations.

We can hardly expect to have a messy divorce from our former European partners and then go straight back to the negotiating table and say ‘Hello friends, can we now have a special deal and get access to your markets - but without conditions please?”  If we were on the other side of the negotiating table, you can only imagine what the response would be.

The only way we would be granted access to markets is if we paid for it in some way or if we conceded on the principle of free movement – in other words, we’d have to strike a deal and make concessions in the same way that Switzerland, Iceland and Norway have had to do.  Furthermore, those countries have no seat at the negotiating table when decisions affecting trade in Europe are decided upon.

Better to be in a reformed EU, with a special status and continue to negotiate and exert power from within.

I want my constituents to hear both sides of the argument in the run up to the referendum. For this reason I would encourage you to do as I have done and look at the points being made by both the In and Out campaigns – such as Britain Stronger In and Vote Leave.  The BBC has also compiled a good, objective ‘all you need to know guide’ about the referendum and the issues.

If you would like a more in depth read on the subject, the House of Commons library has produced two useful briefing documents, EU referendum: UK proposals, legal impact of an exit and alternatives to membership and EU referendum: impact of an EU exit in key UK policy areas.